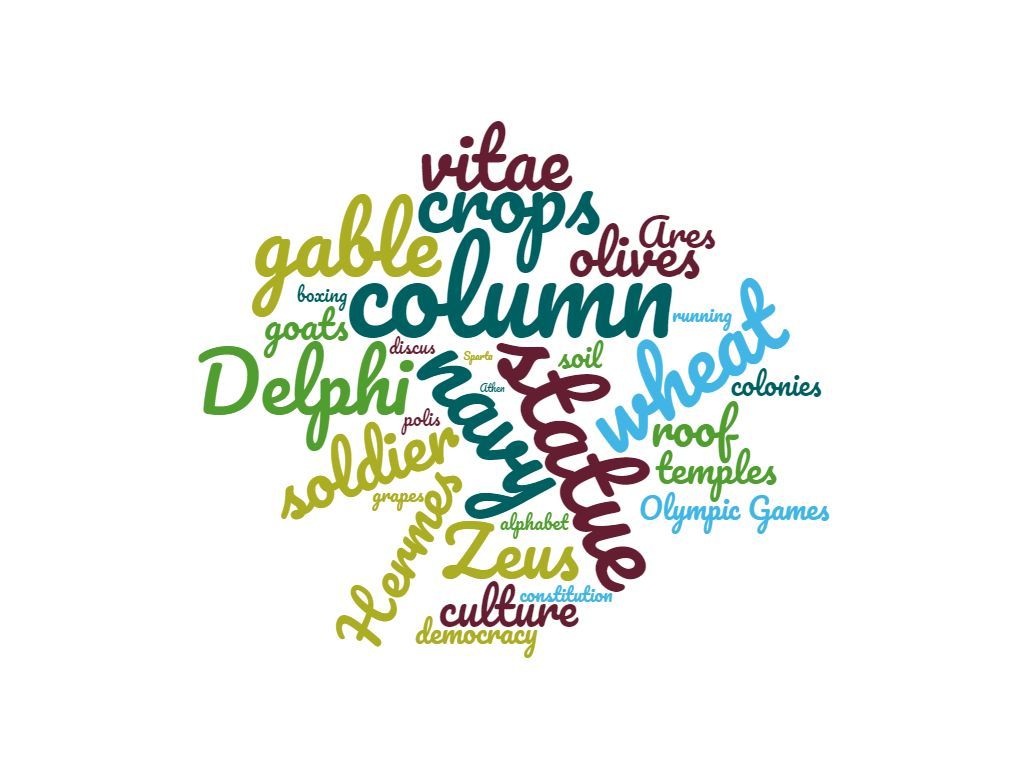 1
Read one of the two texts on “Ancient Greece”. Your teacher will tell you which text you should read. Skim through the text in about 2 minute to get the general idea. You do not need to understand every single word.
Then turn your worksheet upside down so you can’t see the text. Tell a partber who has read the same one as you everything you can remember about the text. Together you can reconstruct the main ideas.
2
Form new pairs and tell your new partner about your text. Listen to her/his summary too. Then try to summ up all the information in a mindmap.
Angaben zu den Urhebern und Lizenzbedingungen der einzelnen Bestandteile dieses Dokuments finden Sie unter
https://www.tutory.de/entdecken/dokument/clil-ancient-greece-4

Ancient Greece had one language and culture, but was not unified until 337 BC, when Macedonia defeated Athens and Thebes. That marked the end of the Classic period, and the start of the Hellenistic period. Even then, the conquered cities were merely joined to Philip II of Macedon's Corinthian League; they were not occupied, and ruled themselves.

Ancient Greece consisted of several hundred more-or-less independent city states. This was different from other societies, which were tribal, or kingdoms ruling over relatively large territories.

Undoubtedly the geography of Greece—divided and sub-divided by hills, mountains and rivers—contributed to the nature of ancient Greece. On the one hand, the ancient Greeks had no doubt that they were 'one people'; they had the same religion, same basic culture, and same language. Yet each city-state or "polis" was independent; unification was something rarely discussed by the ancient Greeks. Even when, during the second Persian invasion of Greece, a group of city-states allied themselves to defend Greece, most poleis remained neutral, and after the Persian defeat, the allies quickly returned to infighting.[3]

The major features of the Ancient Greek political system were:

Its fragmentary nature. There was not one country, but many little countries called "city-states".

The focus on cities in tiny states.

The colonies they set up round the Mediterranean were independent of the founding city. However, they were sympathetic to their 'mother city'.

Conquest or direct rule by another city-state was quite rare.

The cities grouped themselves into leagues, and members sometimes quit one league and joined another.

Later, in the Classical period, the leagues were fewer and larger, and dominated by one city (particularly Athens, Sparta and Thebes). Often cities would be compelled to join under threat of war (or as part of a peace treaty). After Philip II of Macedon 'conquered' the heartlands of ancient Greece, he did not attempt to annex the territory, or unify it into a new province. However, he did force most of the cities to join his own Corinthian League.

Some cities were democratic, some were aristocratic, and some were monarchies. Some had many revolutions in which one kind of government replaced another. One famous Greek kingdom is Macedon, which became briefly the largest empire the world had seen at the time by conquering the Persian empire (including ancient Egypt) and reaching into modern-day India. Other famous kingdoms are Epirus and Thessaly.

Monarchies in ancient Greece were not absolute because there was usually a council of older citizens (the senate, or in Macedonia the congress) who gave advice to the King. These men were not elected or chosen in a lottery like they were in the democratic city-states.

Citizens that could participate in government in Ancient Greece were usually men who were free-born in that city. Women, slaves and (usually) residents born elsewhere, did not have the right to vote. Details differed between cities. Athens is an example: The residents of Athens were of three groups: citizens, metics (resident aliens) and slaves.[4] Citizens were residents whose forebears had been Athenians for three generations. Male citizens had the rights of free men and could be chosen to fulfill any official state position. "Of the estimated 150,000 residents of the city state of Attica, only about one fifth held the privilege of citizenship".[5] Women who were citizens in Athens could not participate in political offices, but in Sparta they could.

The number of Greeks grew and soon they could not grow enough food for all the people. When this happened, a city would send people off to start a new city, known as a colony.

Because the terrain was rough, most travel was by sea. For this reason, many new cities were established along the coastline. First new cities were started in Anatolia (Asia Minor) and later along the Black Sea, in Cyprus, in southern Italy, in Sicily, and around what today is Benghazi in Libya. They even started a city, Naucratis, on the river Nile in Egypt. The cities of today, Syracuse, Naples, Marseille and Istanbul started as the Greek cities Syracusa, Neapolis, Massilia and Byzantium.

By the 6th century BC some cities became much more important than the others. They were Corinth, Thebes, Sparta, and Athens.

The Spartans were very well disciplined soldiers. They defeated the people who lived near them and those people had to farm the land for the Spartans. These "helots" had to give the Spartans part of the food they grew and so the Spartans did not have to work. Instead, they learned how to be better soldiers. There were not many Spartans but there were many helots. Spartan military strength controlled the helots. The Spartans had two hereditary kings who led them in war. At home they were also ruled by a group of old men called the Gerousia (the senate).

Athens became a democracy in 510 BC. The men came to a place in the center of the city and decided what to do. It was the first place in the world where the people decided what their country should do. They would talk and then vote on what to do at the Boule (the parliament). But the women did not vote. Athens had slaves. These slaves were owned by their masters and could be sold to someone else. The Athenian slaves were less free than the Spartan helots. Every year, Athenian citizens elected eight generals who led them in war.